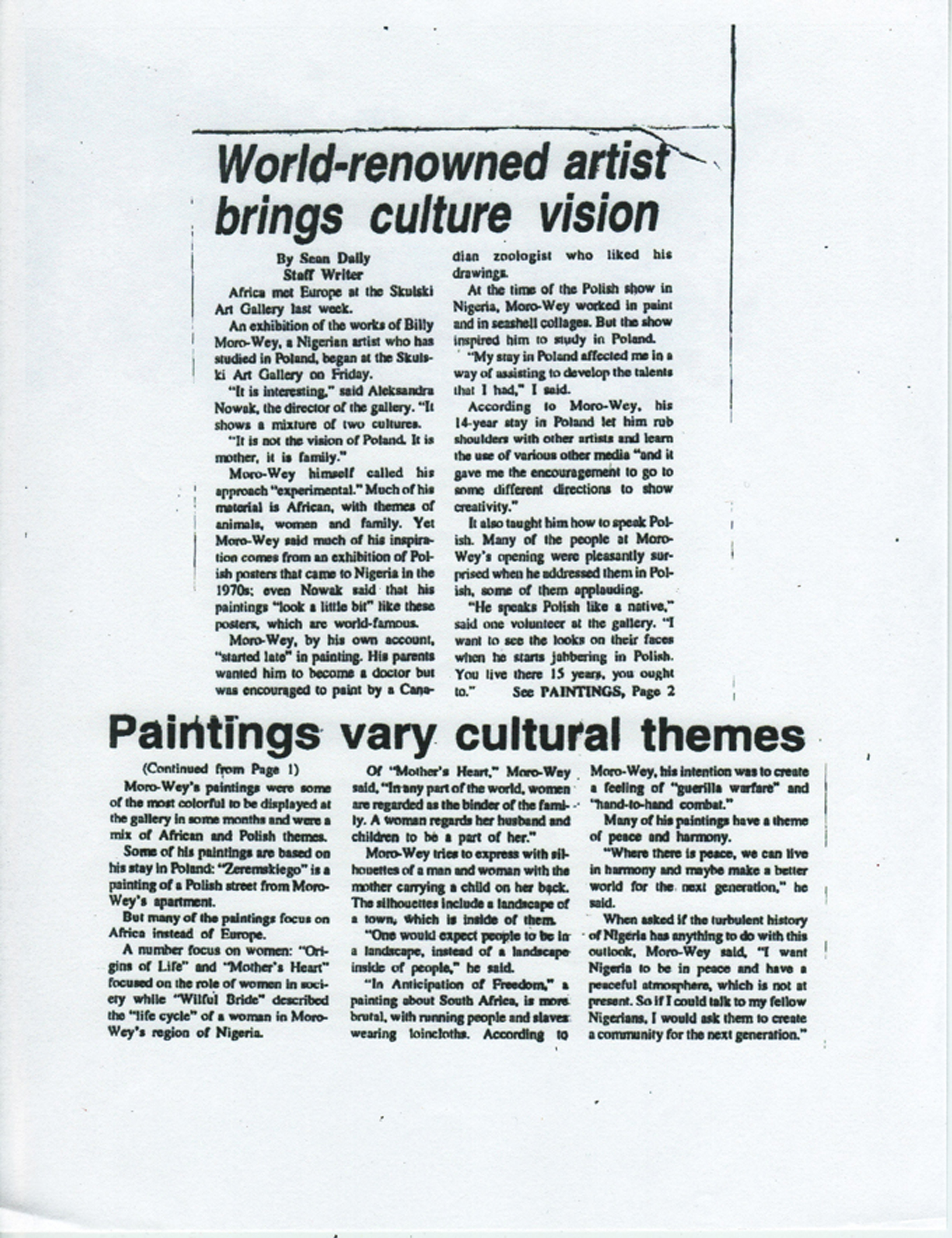 An exhibition of the works of Billy Moro-Wey, a Nigerian artist who has studied in Poland, began at the Skulski Art Gallery on Friday.

“It is interesting,” said Aleksandra Nowak, the director of the gallery. “It shows a mixture of two cultures.”

“It is not the vision of Poland. It is mother, it is family.”

Moro-Wey himself called his approach “experimental.” Much of his material is African, with themes of animals, women and family. Yet Moro-Wey said much of his inspiration comes from an exhibition of Polish posters that came to Nigeria in the 1970s; even Nowak said that his paintings “look a little bit” like these posters, which are world-famous.

Moro-Wey, by his own account, “started late” in painting. His parents wanted him to become a doctor but was encouraged to paint by a Canadian zoologist who liked his drawings. At the time of the Polish show in Nigeria, Moro-Wey worked in paint and in seashell collages. But the show inspired him to study in Poland.

“My stay in Poland affected me in a way of assisting to develop the talents that I had,” I said.

According to Moro-Wey, his 14-yeard stay in Poland let him rub shoulders with other artists and learn the use of various other media “and it gave me the encouragement to go to some different directions to show creativity.”

It also taught him how to speak Polish. Many of the people at Moro-Wey’s opening were pleasantly surprised when he addressed them in Polish, some of them applauding.

“He speaks Polish like a native,” said one volunteer at the gallery. “I wanted to see the looks on their faces when he starts jabbering in Polish. You live there 15 years, you ought to.”

Moro-Wey’s paintings were some of the most colorful to be displayed at the gallery in some months and were a mix of African and Polish themes.
Some of his paintings are based on his stay in Poland: “Zeremskiego” is a painting of a Polish street from Moro-Wey’s apartment.
But many of the paintings focus on Africa instead of Europe.

A number focus on women: “Origins of Life” and “Mother’s Heart” focused on the role of women in society while “Willful Bride” described the “life cycle” of a woman in Moro-Wey’s region of Nigeria.

Of “Mother’s Heart,” Moro-Wey said, “In any part of the world, women are regarded as the binder of the family. A woman regards her husband and children to be a part of her.”

Moro-Wey tries to express with silhouettes of a man and woman with the mother carrying a child on her back. The silhouettes include a landscape of a town, which is inside of them.

“One would expect people to be in a landscape, instead of a landscape inside of people,” he said.

“In Anticipation of Freedom,” a painting about South Africa, is more brutal, with running people and slaves wearing loincloths. According to Moro-Wey, his intention was to create a feeling of “guerilla warfare” and “hand-to-hand combat.”

Many of his paintings have a theme of peace and harmony.

“Where there is peace, we can live in harmony and maybe make a better world for the next generation,” he said.

When asked if the turbulent history of Nigeria has anything to do with this outlook, Moro-Wey said, “I want Nigeria to be in peace and have a peaceful atmosphere, which is not at present. So if I could talk to my follow Nigerians, I would ask them to create a community for the next generation.”