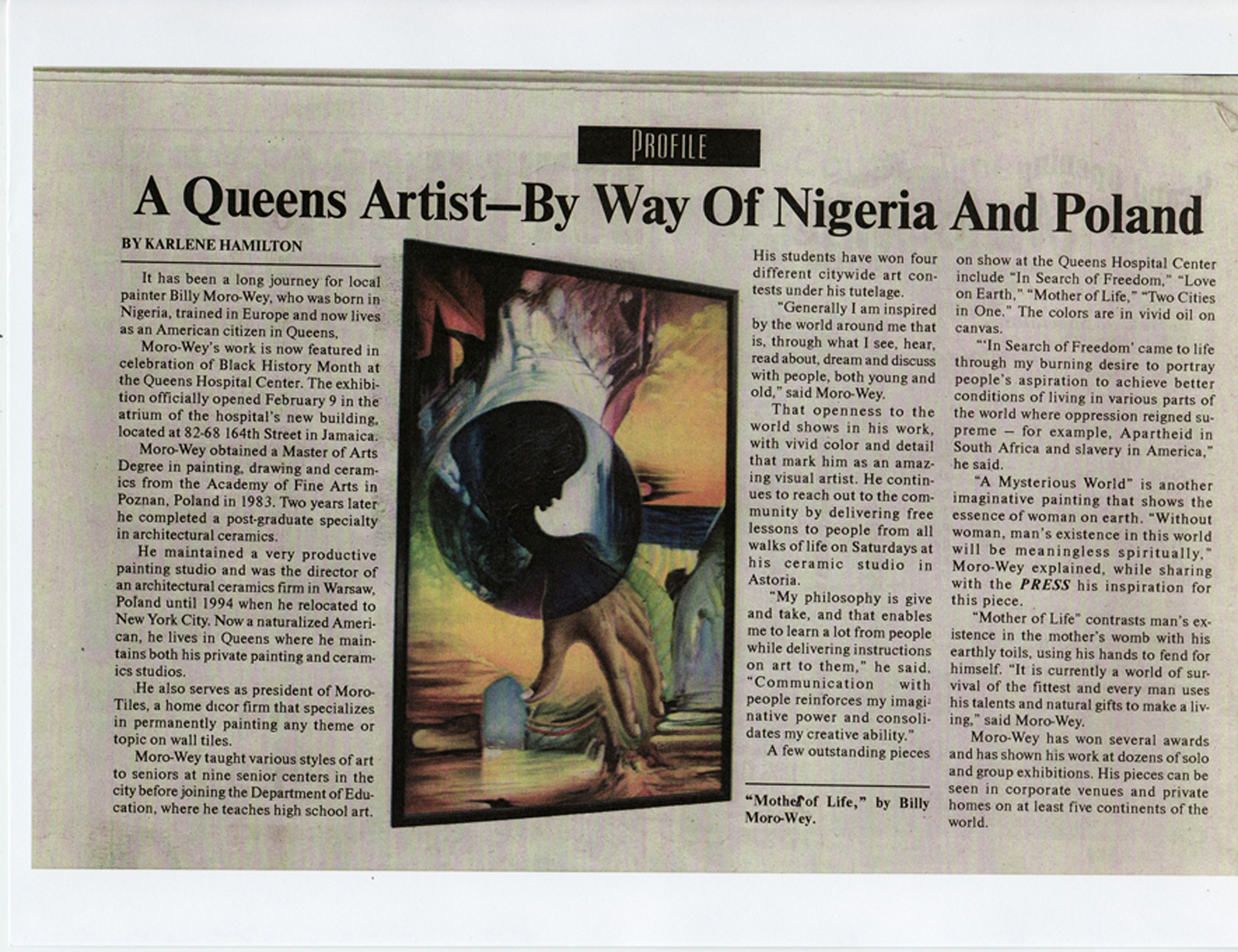 It has been a long journey for local painter Billy Moro-Wey, who was born in Nigeria, trained in Europe and now lives as an American citizen in Queens.
Moro-Wey’s work is now featured in celebration of Black History Month at the Queens Hospital Center. The exhibition officially opened February 9 in the atrium of the hospital’s new building, located at 82-68 164th Street in Jamaica.

Moro-Wey obtained a Master of Arts Degree in painting, drawing and ceramics from the Academy of Fine Arts in Poznan, Poland in 1983. Two years later he completed a post-graduate specialty in architectural ceramics.

He maintained a very productive painting studio and was the director of an architectural ceramics firm in Warsaw, Poland until 1994 when he relocated to New York City. Now a naturalized American, he lives in Queens where he maintains both his private painting and ceramics studios.

He also serves as president of Moro-Tiles, a home décor firm that specializes in permanently painting any theme or topic on wall tiles.

Moro-Wey taught various styles of art to seniors at nine senior centers in the city before joining the Department of Education, where he teaches high school art.
His students have won four different citywide art contests under his tutelage.

“Generally I am inspired by the world around me that is, through what I see, hear, read about, dream and discuss with people, both young and old,” said Moro-Wey.

That openness to the world shows in his work, with vivid color and detail that mark him as an amazing visual artist. He continues to reach out to the community by delivering free lessons to people from all walks of life on Saturdays at his ceramic studio in Astoria.

“My philosophy is give and take, and that enables me to learn a lot from people while delivering instructions on art to them,” he said. “Communication with people reinforces my imaginative power and consolidates my creative ability.”

A few outstanding pieces on show at the Queens Hospital Center include “In Search of Freedom,” “Love on Earth,” “Mother of Life,” “Two Cities in One.” The colors are in vivid oil on canvas.

“’In Search of Freedom’ came to life through my burning desire to portray people’s aspiration to achieve better conditions of living in various parts of the world where oppression reigned supreme—for example, Apartheid in South Africa and slavery in America,” he said.

“A Mysterious World” is another imaginative painting that shows the essence of woman on earth. “Without woman, man’s existence in this world will be meaningless spiritually,” Moro-Wey explained, while sharing with the PRESS his inspiration for this piece.

“Mother of Life” contrasts man’s existence in the mother’s womb with his earthly toils, using his hands to fend for himself. “It is currently a world of survival of the fittest and every man uses his talents and natural gifts to make a living,” said Moro-Wey.

Moro-Wey has won several awards and has shown his work at dozens of solo and group exhibitions. His pieces can be seen in corporate venues and private homes on at least five continents of the world.