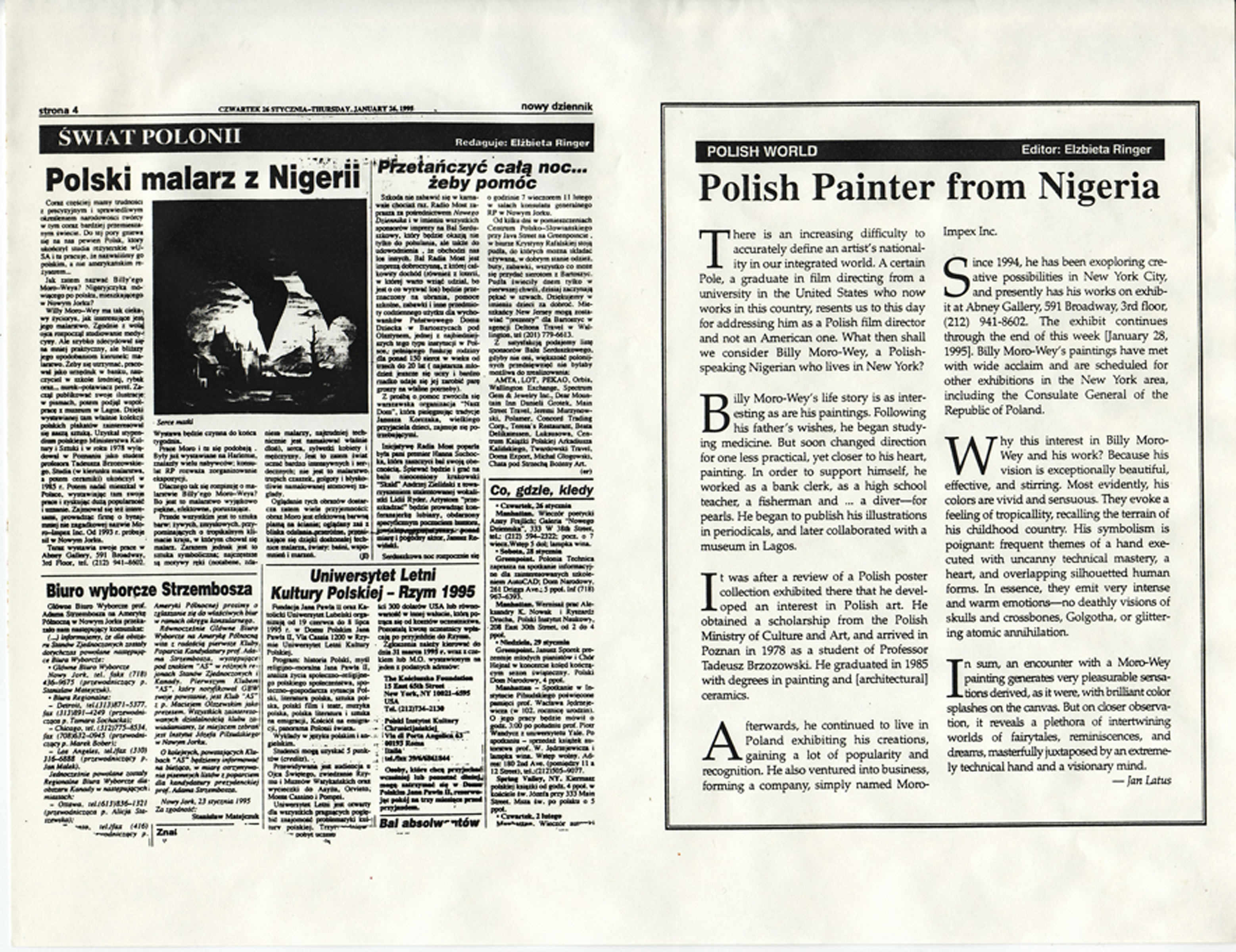 There is an increasing difficult to accurately define an artist’s nationality in our integrated world. A certain Pole, a graduate in film directing from a university in the United States who now works in this country, resents us to this day for addressing him as a Polish film director and not an American one. What then shall we consider Billy Moro-Wey, a Polish-speaking Nigerian who lives in New York?

Billy Moro-Wey’s life story is as interesting as are his paintings. Following his father’s wishes, he began studying medicine. But soon changed direction from one less practical, yet closer to his heart, painting. In order to support himself, he worked as a bank clerk, as a high school teacher, a fisherman and … a diver—for pearls. He began to publish his illustrations in periodicals, and later collaborated with a museum in Lagos.

It was after a review of a Polish poster collection exhibited there that he developed an interest in Polish art. He obtained a scholarship from the Polish Ministry of Culture and Art, and arrived in Poznan in 1978 as a student of Professor Tadeusz Brzozowski. He graduated in 1985 with degrees in painting and [architectural] ceramics.

Afterwards, he continued to live in Poland exhibiting his creations, gaining a lot of popularity and recognition. He also ventured into business, forming a company simply named Moro-Impex Inc.

Since 1994, he bas been exploring creative possibilities in New York City, and presently has his works on exhibit at Abney Gallery, 591 Broadway, 3rd floor, (212) 941-8602. The exhibit continues through the end of this week [January 28, 1995]. Billy Moro-Wey’s paintings have met with wide acclaim and are scheduled for other exhibitions in New York area, including the Consulate General of the Republic of Poland.

Why this interest in Billy Moro-Wey and his work? Because his vision is exceptionally beautiful, effective, and stirring. Most evidently, his colors are vivid and sensuous. They evoke a feeling of tropicallity, recalling the terrain of his childhood country. His symbolism is poignant: frequent themes of hand executed with uncanny technical mastery, a heart, and overlapping silhouetted human forms. In essence, they emit very intense and warm emotions—no deathly visions of skulls and crossbones, Golgotha, or glittering atomic annihilation.

In sum, an encounter with a Moro-Wey painting generates very pleasurable sensations derived, as it were, with brilliant color splashes on canvas. But on closer observation, it reveals a plethora of intertwining world of fairytales, reminiscences, and dreams, masterfully juxtaposed by an extremely technical hand and visionary mind.—Jan Latus