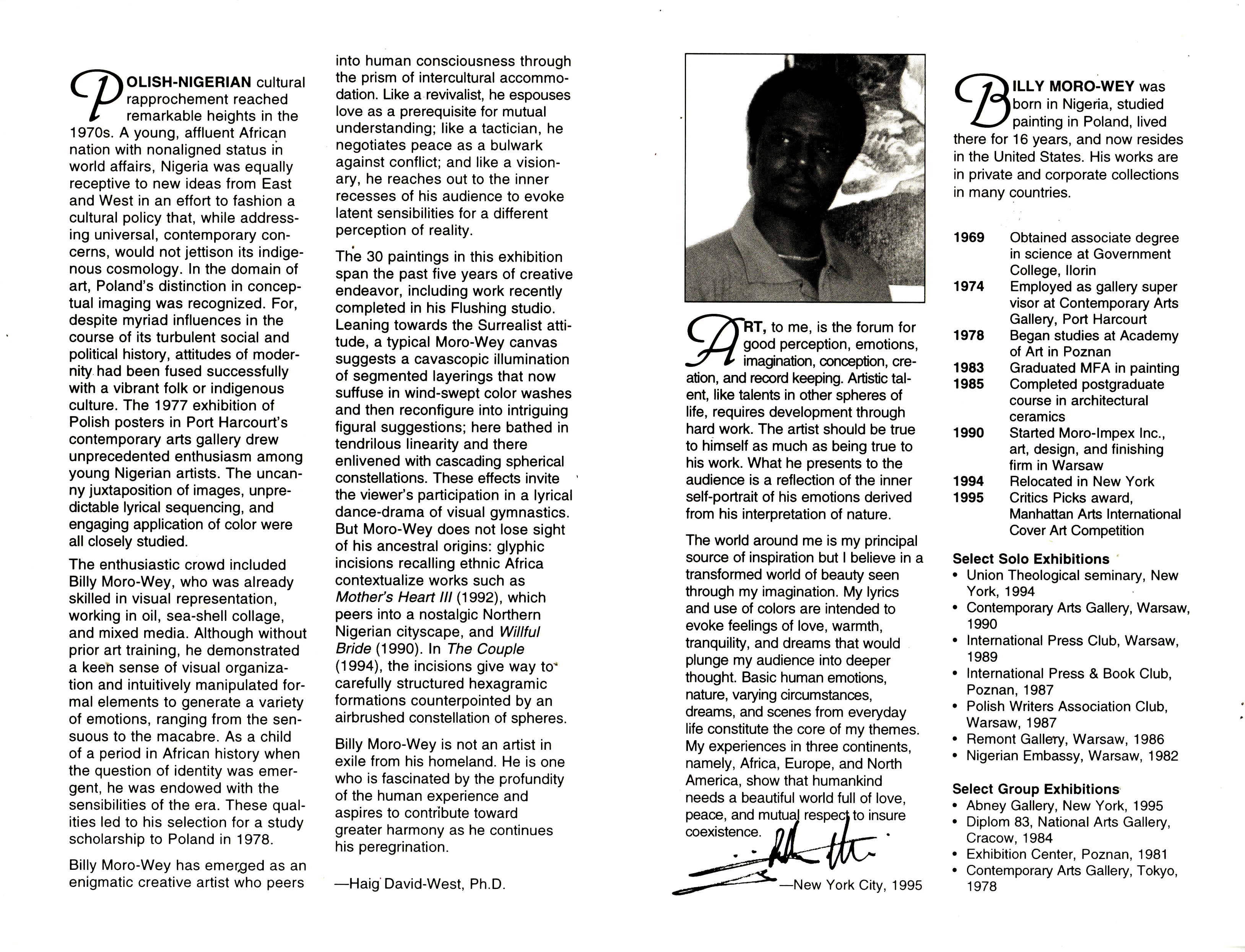 Polish-Nigerian cultural rapprochement reached remarkable heights in the 1970s. A young, affluent African nation with nonaligned status in world affairs, Nigeria was equally receptive to new ideas from Easy and West in effort to fashion a cultural policy that, while addressing universal, contemporary concerns, would not jettison its indigenous cosmology. In the domain of art, Poland’s distinction in conceptual imaging was recognized. For, despite myriad influences in the course of its turbulent social and political history, attitudes of modernity had been fused successfully with a vibrant folk or indigenous culture. The 1977 exhibition of Polish posters in Port Harcourt’s contemporary arts gallery drew unprecedented enthusiasm among young Nigerian artists. The uncanny juxtaposition of images, unpredictable lyrical sequencing, and engaging application of color were all closely studied.

The enthusiastic crowd included Billy Moro-Wey, who was already skilled in visual representation, working in oil, seashell collage, and mixed media. Although without prior art training, he demonstrated a keen sense of visual organization elements to generate a variety of emotions, ranging from the sensuous to the macabre. As a child of a period in African history when the question of identity was emergent, he was endowed with the sensibilities of the era. These qualities led to his selection for a study scholarship to Poland in 1978.

Billy Moro-Wey has emerged as an enigmatic creative artist who peers into human consciousness though the prism of intercultural accommodation. Like a revivalist, he espouses love as a prerequisite for mutual understanding; like a tactician, he negotiates peace as a bulwark against conflict; and like a visionary, he reaches out to the inner recesses of his audience to evoke latent sensibilities for a different perception of reality.

The 30 paintings in this exhibition span the past five years of creative endeavor, including work recently completed in his Flushing studio. Leaning towards the Surrealist attitude, a typical Moro-Wey canvas suggests a cavascopic illumination of segmented layering that now suffuse in wind-swept color washes and then reconfigure into intriguing figural suggestions; here bathed in tendrilous linearity and there enlivened with cascading spherical constellations. These effects invite the viewer’s participation in a lyrical dance-drama of visual gymnastics. But Moro-Wey does not lose sigh of his ancestral origins: glyphic incisions recalling ethnic Africa contextualize works such as Mother’s Heart III (1992), which peers into a nostalgic Northern Nigerian cityscape, and Willful Bride (1990). In The Couple (1994), the incisions give away to carefully structured hexagramic formations counterpointed by an airbrushed constellation of spheres.
Billy Moro-Wey is not an artist in exile from his homeland. He is one who is fascinated by the profundity of the human experience and aspires to contribute toward greater harmony as he continues his peregrination.

Art, to me, is the forum for good perception, emotions, imagination, conception, creation, and record keeping. Artistic talent, like talents in other spheres of life, requires development through hard work. The artist should be true to himself as much as being true to his work. What he presents to the audience is a reflection of the inner self-portrait of his emotions derived from his interpretation of nature.

The world around me is my principal source of inspiration but I believe in a transformed world of beauty seen through my imagination. My lyrics and use of colors are intended to evoke feelings of live, warmth, tranquility, and dreams that would plunge my audience into deeper thought. Basic human emotions, nature, varying circumstances, dreams, and scenes form everyday life constitute the core of my themes. My experiences in three continents, namely Africa, Europe, and North America, show that humankind needs a beautiful world full of love, peace, and mutual respect to insure coexistence.